ABOUT PYREX AND OTHER MEASURING JUGS

Many people collect Pyrex, and there are many groups on pages such as Facebook, but there is a limited amount of information on what I collect which is measuring cups. This being the case I thought I would try and pull together information and examples to help any others who collect such items, or who are just interested. I have taken information from other pages I have come across and shared the links to these items.

I hope this will help provide information for other measuring jug collectors, if you have anything I can add please forward. to info@Barryeva.com

In 1908, Corning Glass Works started making Nonex, a thermally resistant “non-expansion glass,” for railroad signal lanterns and other industrial applications. This clear glass moved into the kitchen through the efforts of Corning employee Jesse Littleton. As the origin story goes, he brought a sawed-off battery jar home to his wife Bessie, and she used the shallow mold to bake a cake.

Capitalizing on the fact that the domestic sphere could benefit from the glass's durability as much as the industrial world, Corning had a hit on its hands. By 1915, it was selling Pyrex pie plates, casserole dishes, and bakeware to the housewives of America. And despite the fact that people, hang onto their Pyrex pieces for a lifetime it’s still selling and making its way into homes.

The unique properties of the glass made it unlike anything else on the market — it was able to withstand temperature changes, didn’t discolor, didn’t react with ingredients to change the taste of food (like cast iron), didn’t retain food smells after washing (like ceramics and earthenware), and because the original Pyrex pieces were see-through, bakers could watch the sides of their cakes, pies, and casseroles turn golden-brown as they cooked.

In 1936, Corning bought a glass factory in Charleroi, PA, just outside of Pittsburgh, which had the capability to produce colorful opal glass — a tempered opaque glass with the same heat-resistant properties as the clear glass coming out of Upstate New York. Again, although this opalware was originally used on an industrial scale (to outfit military mess halls during World War II), the technology trickled into the home kitchen with the release of the iconic primary-colored Pyrex nesting bowls in 1945. 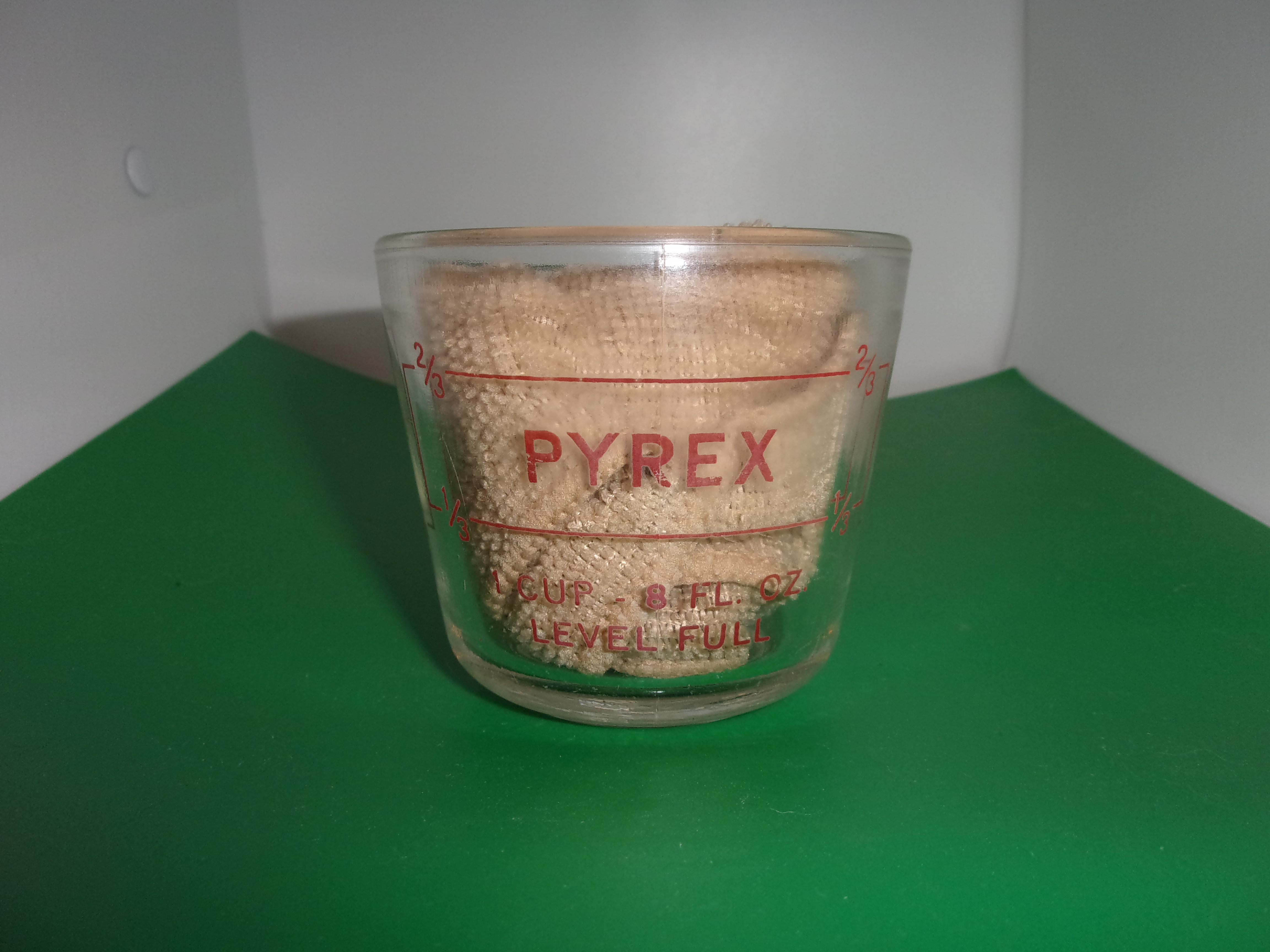 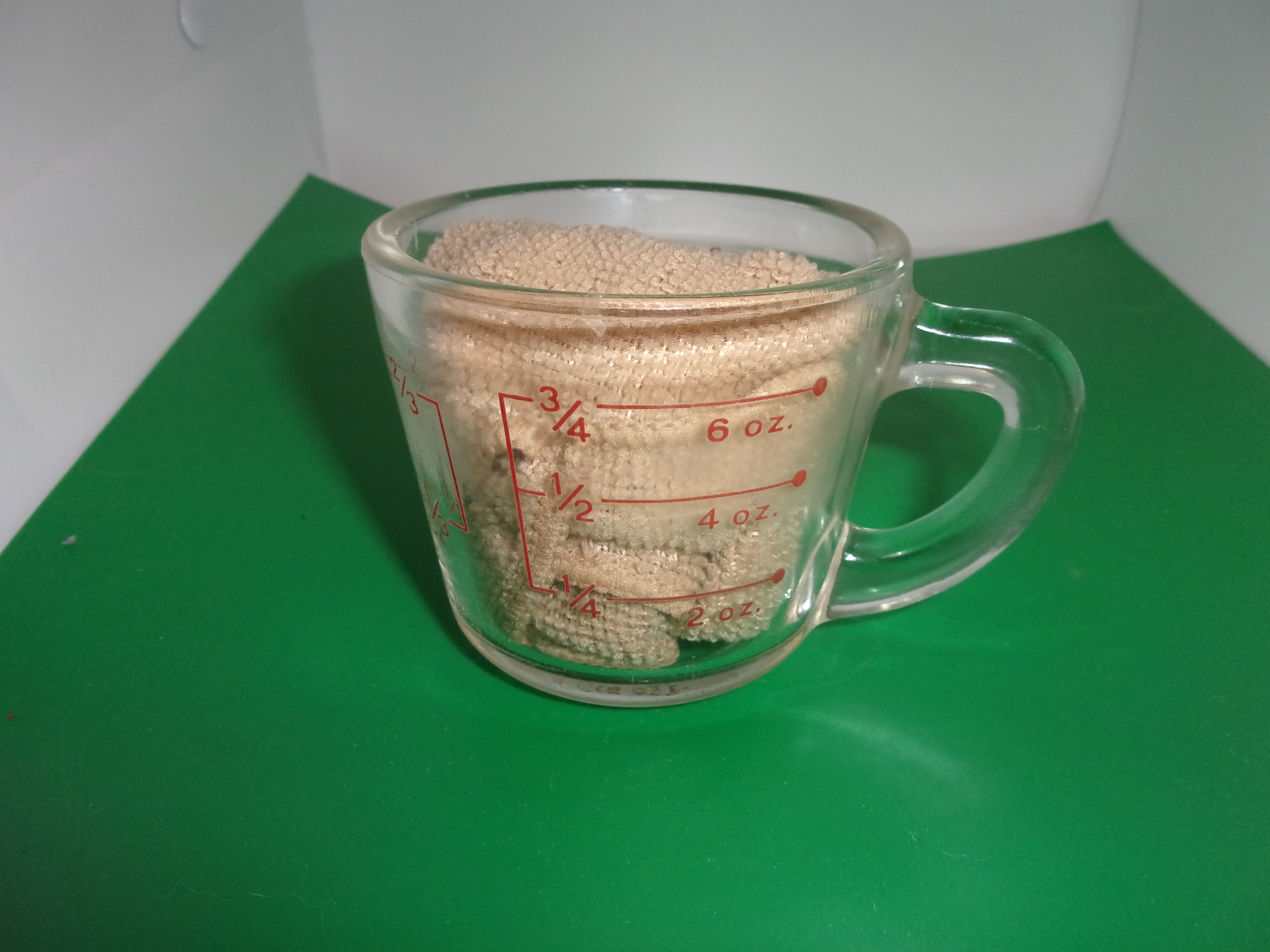 The second, which is very much like the example from Pyrex Love, is much the same with smaller writing font, thinner glass (2/16) note the slightly more curved inner handle. It is labeled 18 D-CC with a message “For General Household and General Photographic Use Only” this message has been used on several variations of jug. 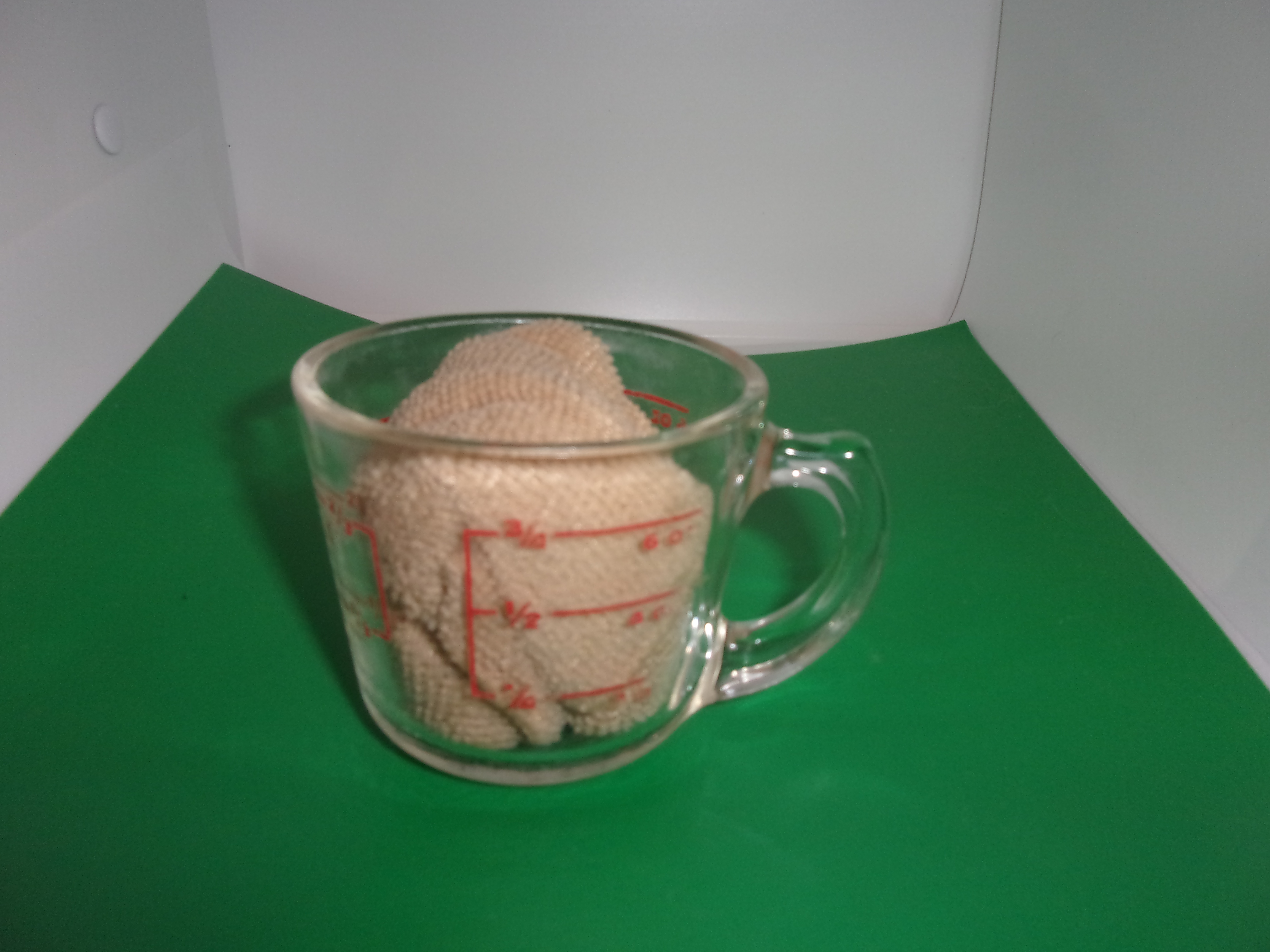 The wet measuring cup (the spout indicates a "wet" measuring cup) was produced in the 1940's in 1 cup, 1 pint and 1 quart sizes. The numbers are 508, 516 and 532 for those sizes respectively. The older models are non-metric and the writing is sometimes not "raised" or "incised" into the glass (that is it is printed on it directly on the glass like the Pyrex Colors patterns). As always, the first thing that will tell when you have a pre-1990 measuring cup by the handle - a "closed D" handle represents the older pieces. The older versions as in PICTURE 3 as well as being just in non-metric also have the word PYREX printed across under the spout, whereas later on it was moved to be printed down the side. 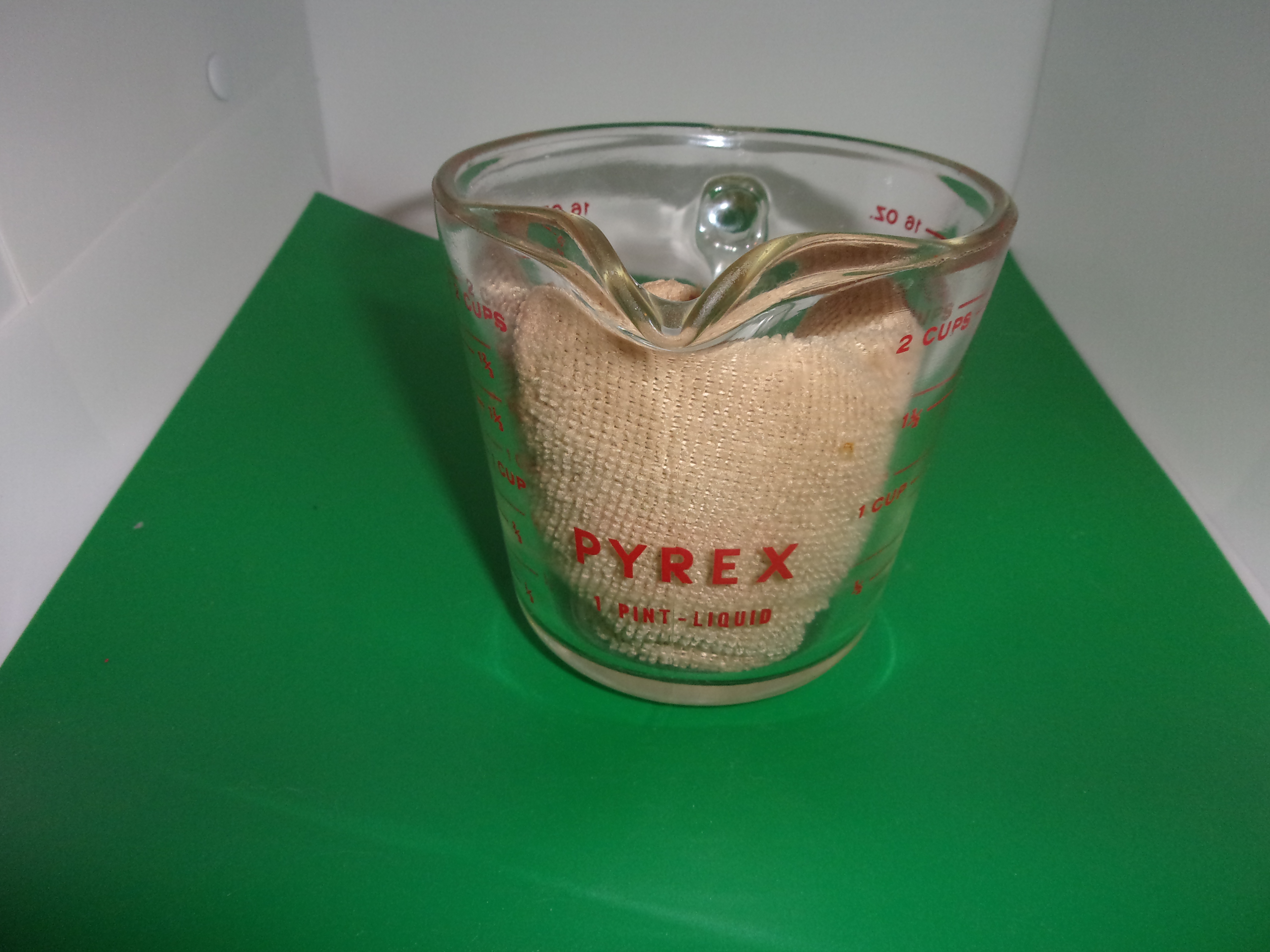 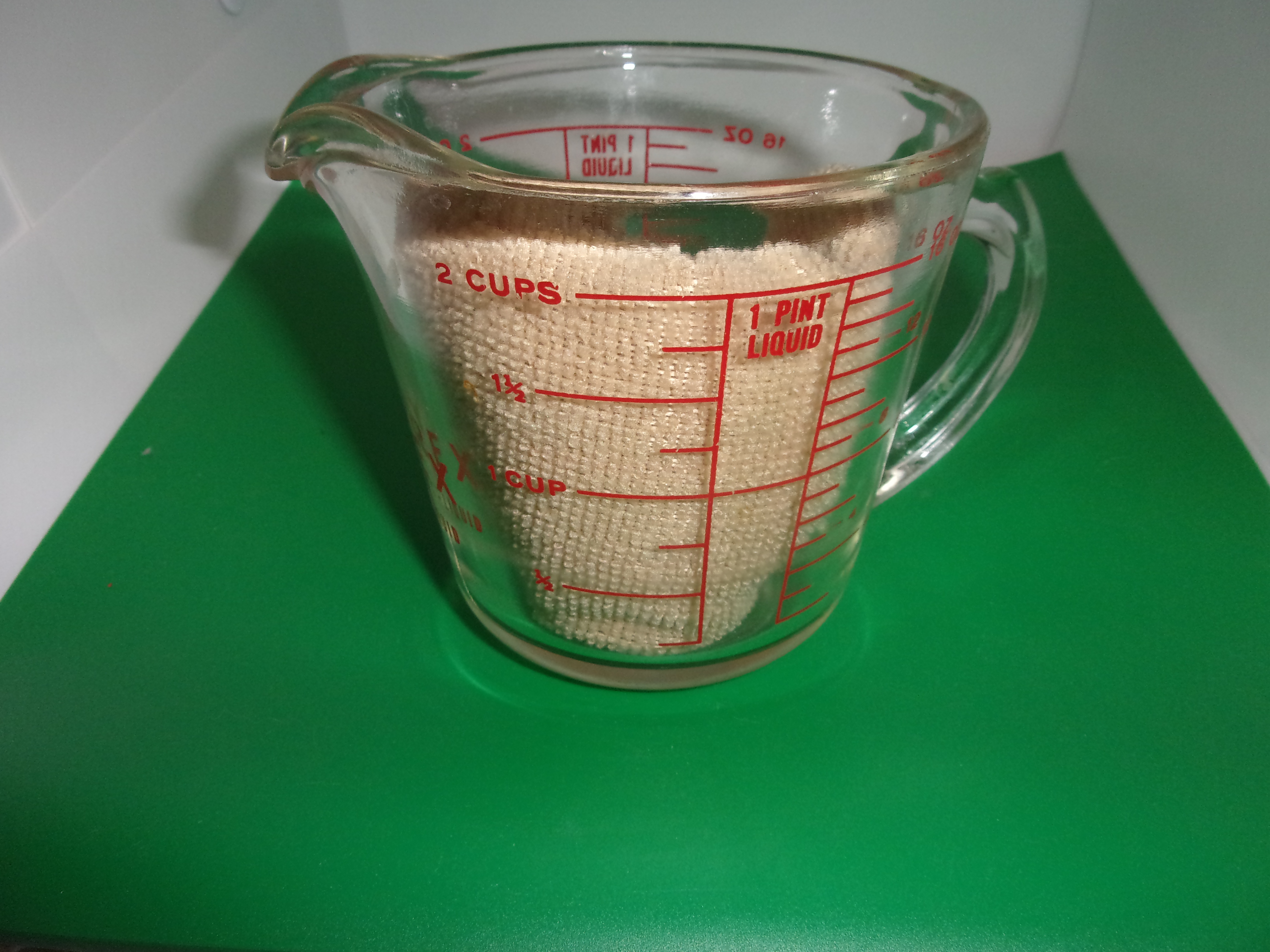 Up until the 1990's the formats and shapes of the liquid jugs went through many forms. Shown below are a few of my collection.

PICTURE 4: Shows a one cup with PYREX on the side, but still both sides non metric it is a K-4 (wish there was a list of those and what they mean re dates, I am trying to get that information still.
PICTURE 4 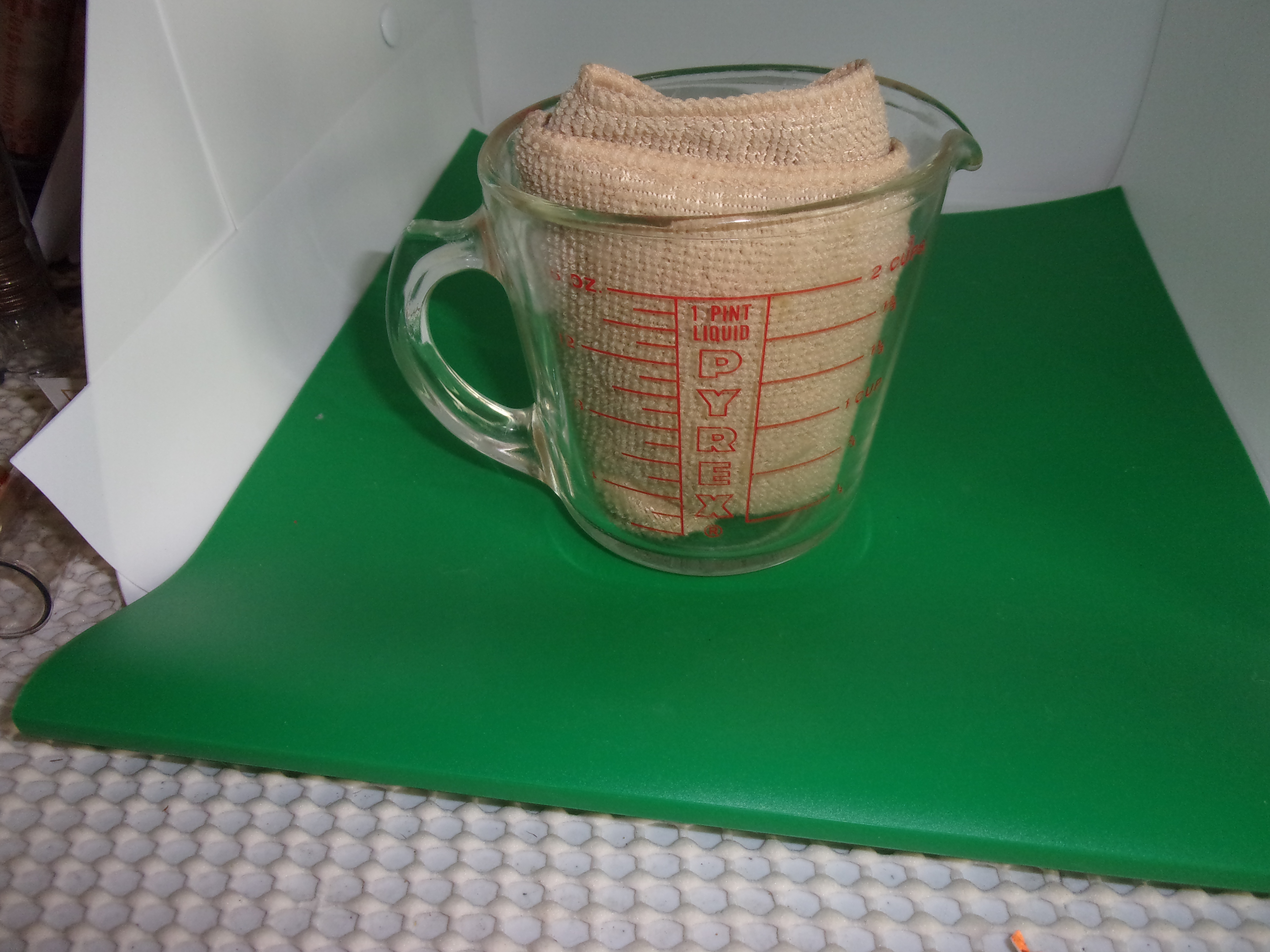 PICTURE 5: This is an A-31 which would tend to pint out an early model, with the glass thickness very akin to the 1940's cups. It does though have both Metric and non-metric measurements on the side. The word PYREX is a smaller font, and it is taller than other 1 cup jugs being a good half inch from the measuring line to the rim. One interesting point is that while the non-metric PYREX which is on the left (looking from the spout) is the normal open font the metric side PYREX is solid red font.
PICTURE 5 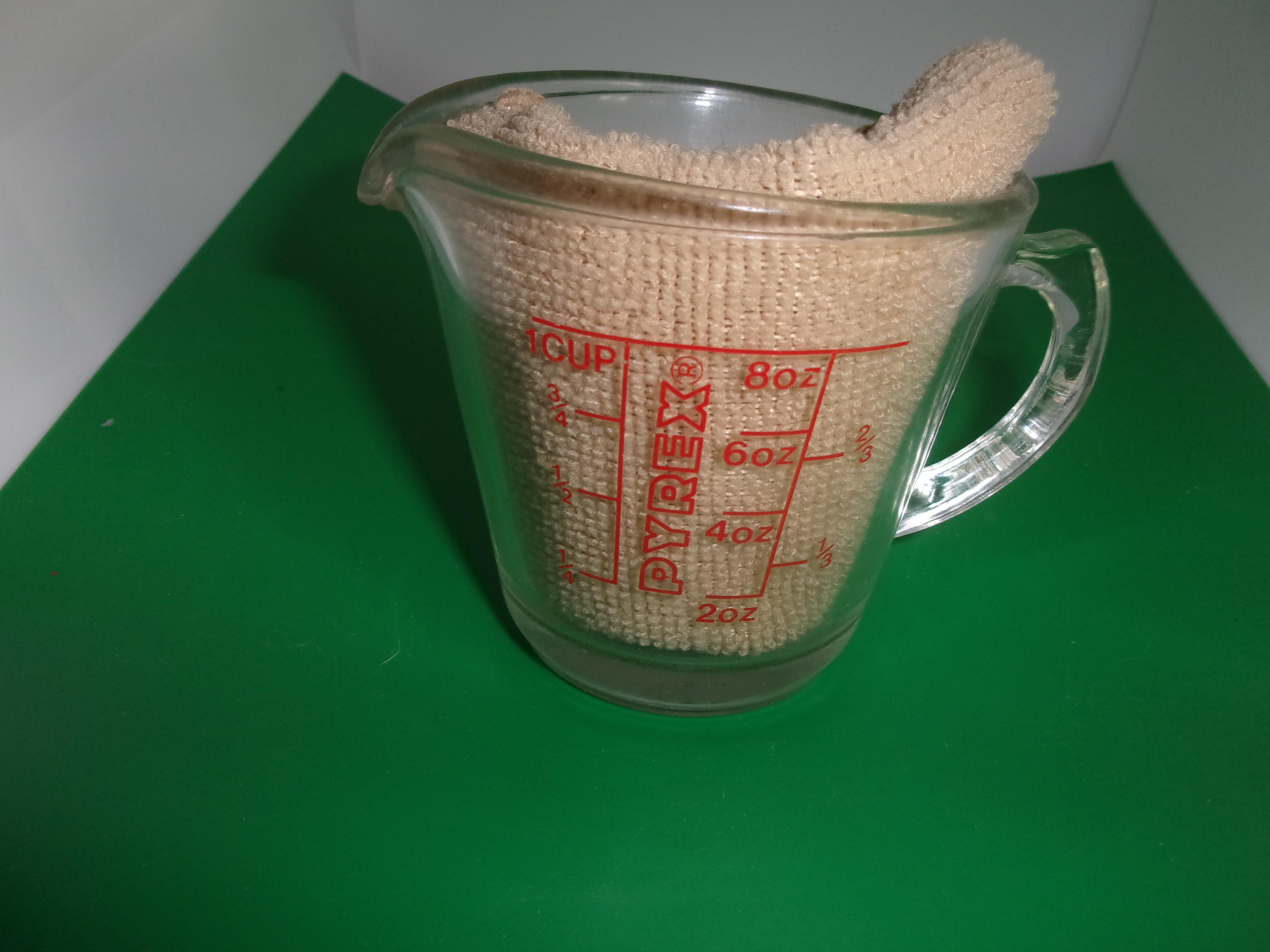 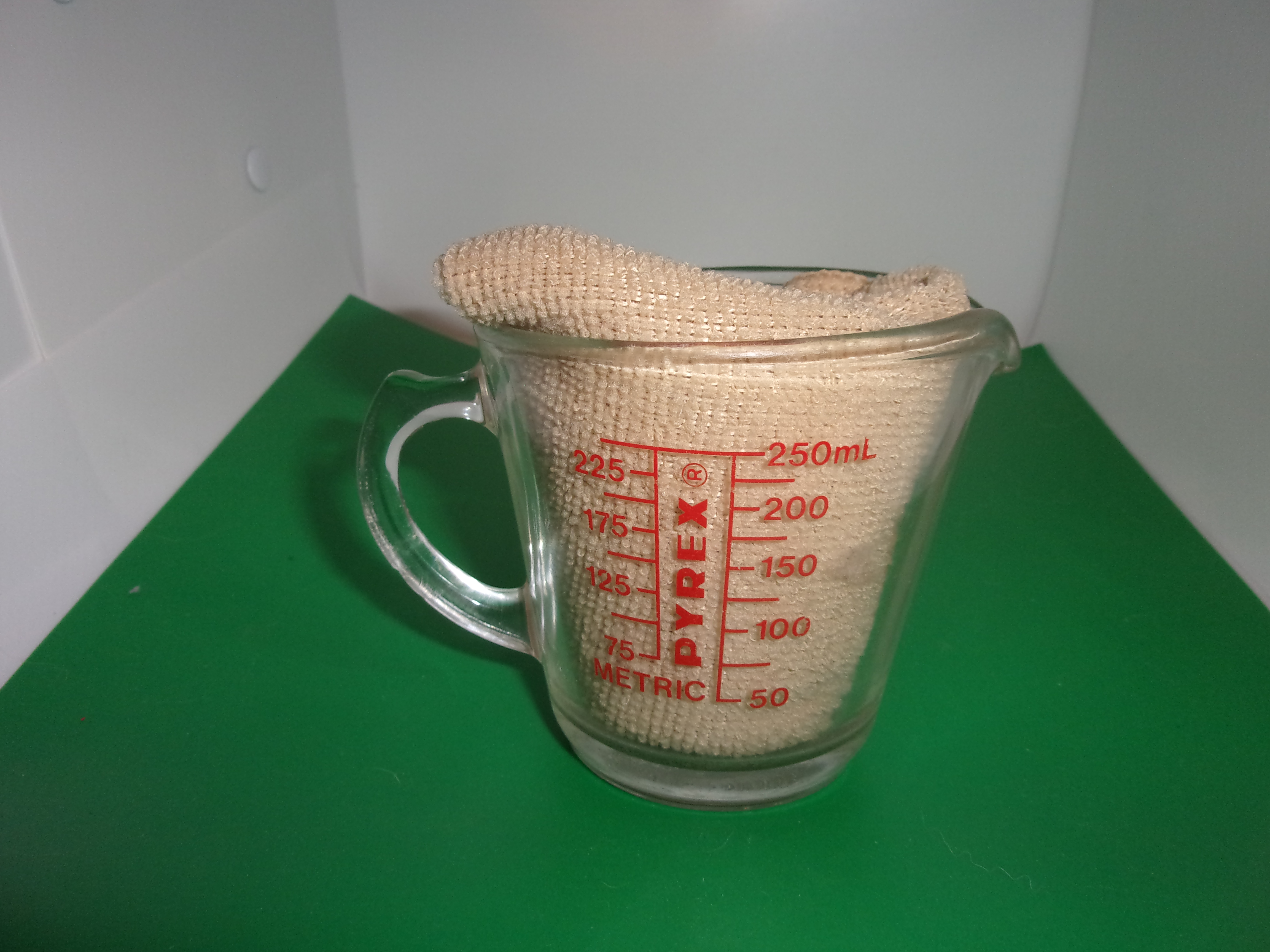 PICTURE 6: This is an A-11 very much the same as that shown in Picture 6, except the PYREX is open on the non-metric side and filled on the metric sides, also the sides have swapped, we now have metric on the right side of the jug (looking from the spout). 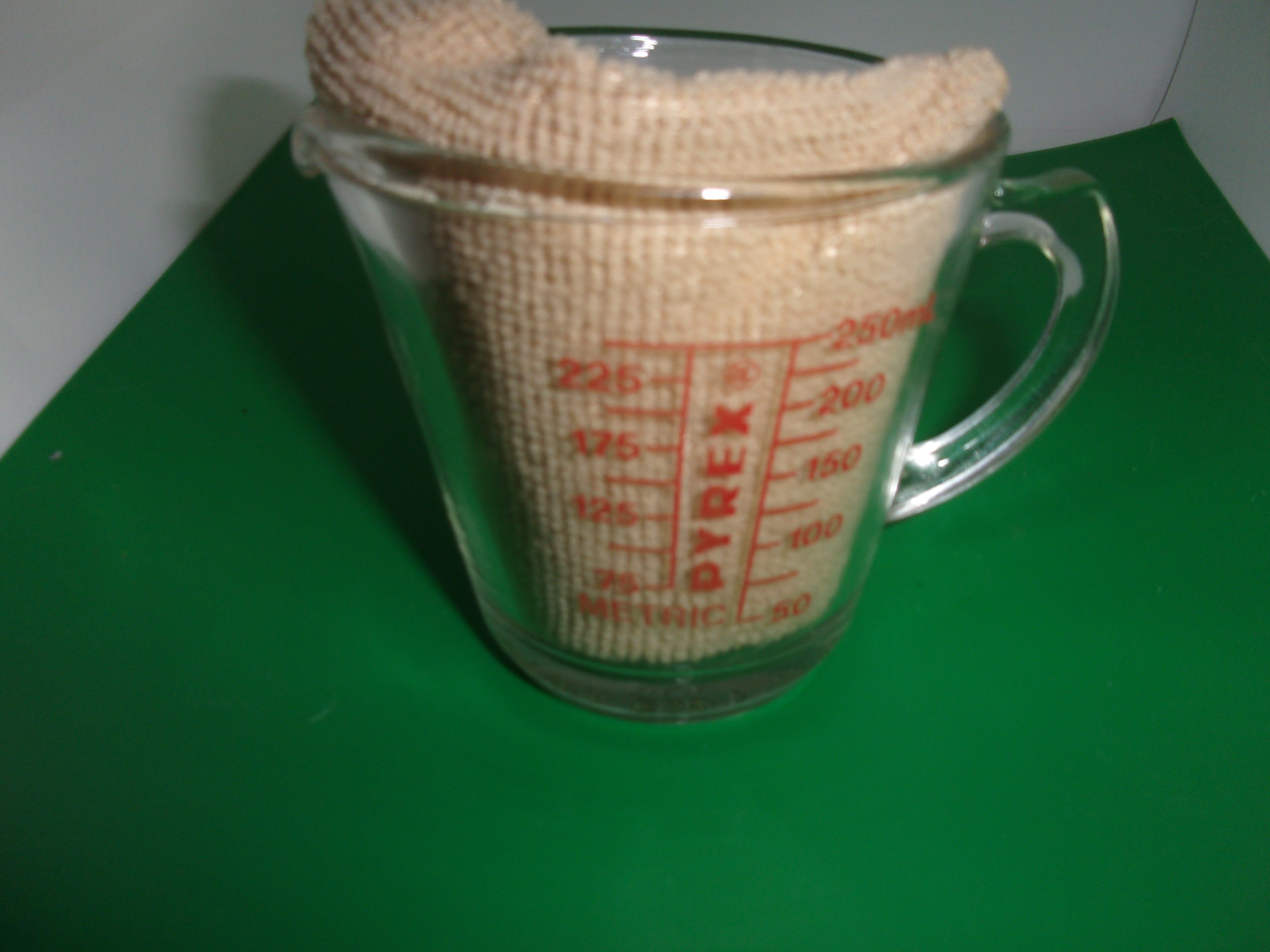 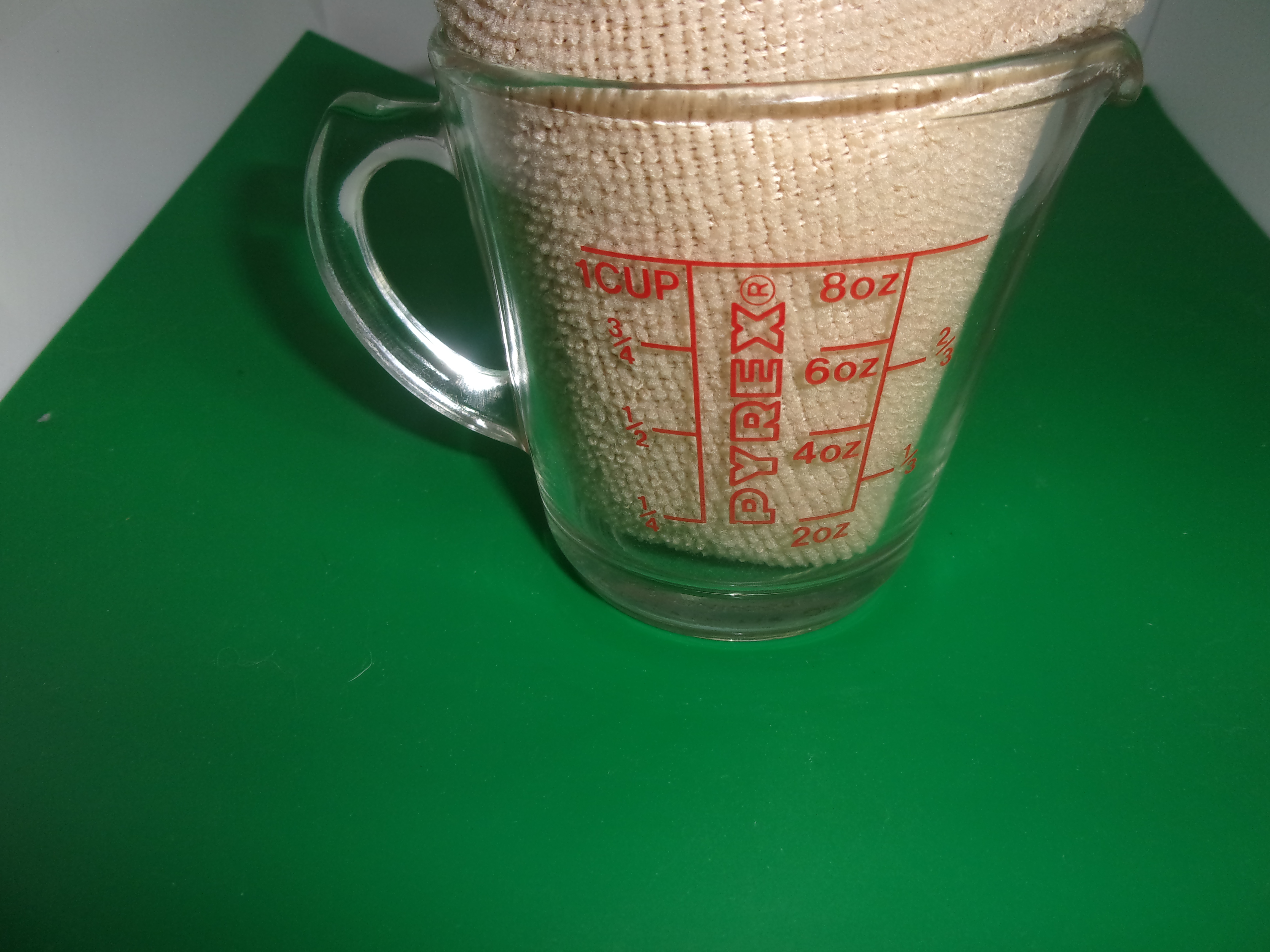 PICTURE 7:This is an I-13, it is smaller and the glass thinner than the previous ones and now just has "Not for Lab or Stovetop use" on the base as well as just the trademark, and USA on the base. Both sides now have open font PYREX with the metric still on the right side. 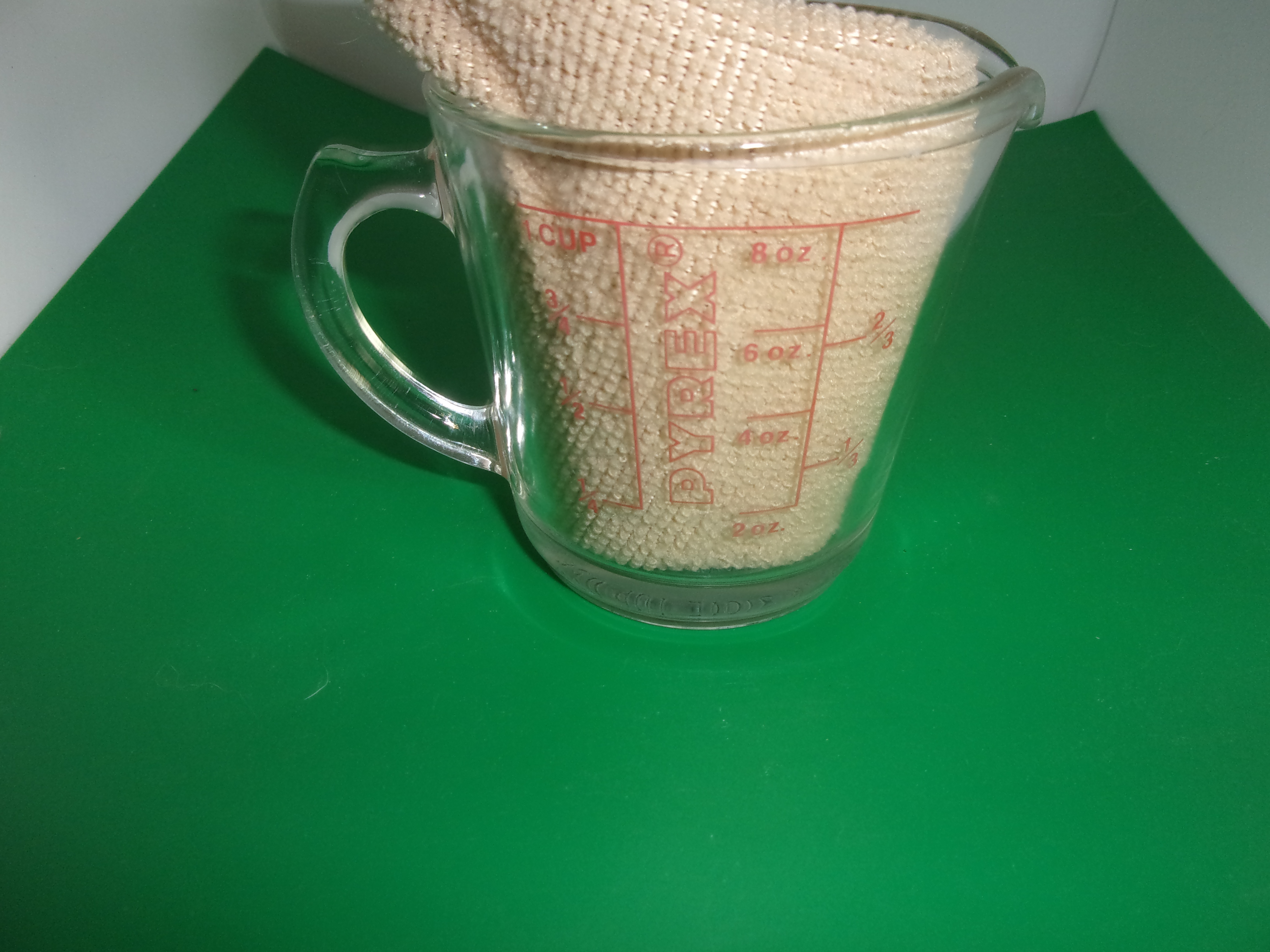 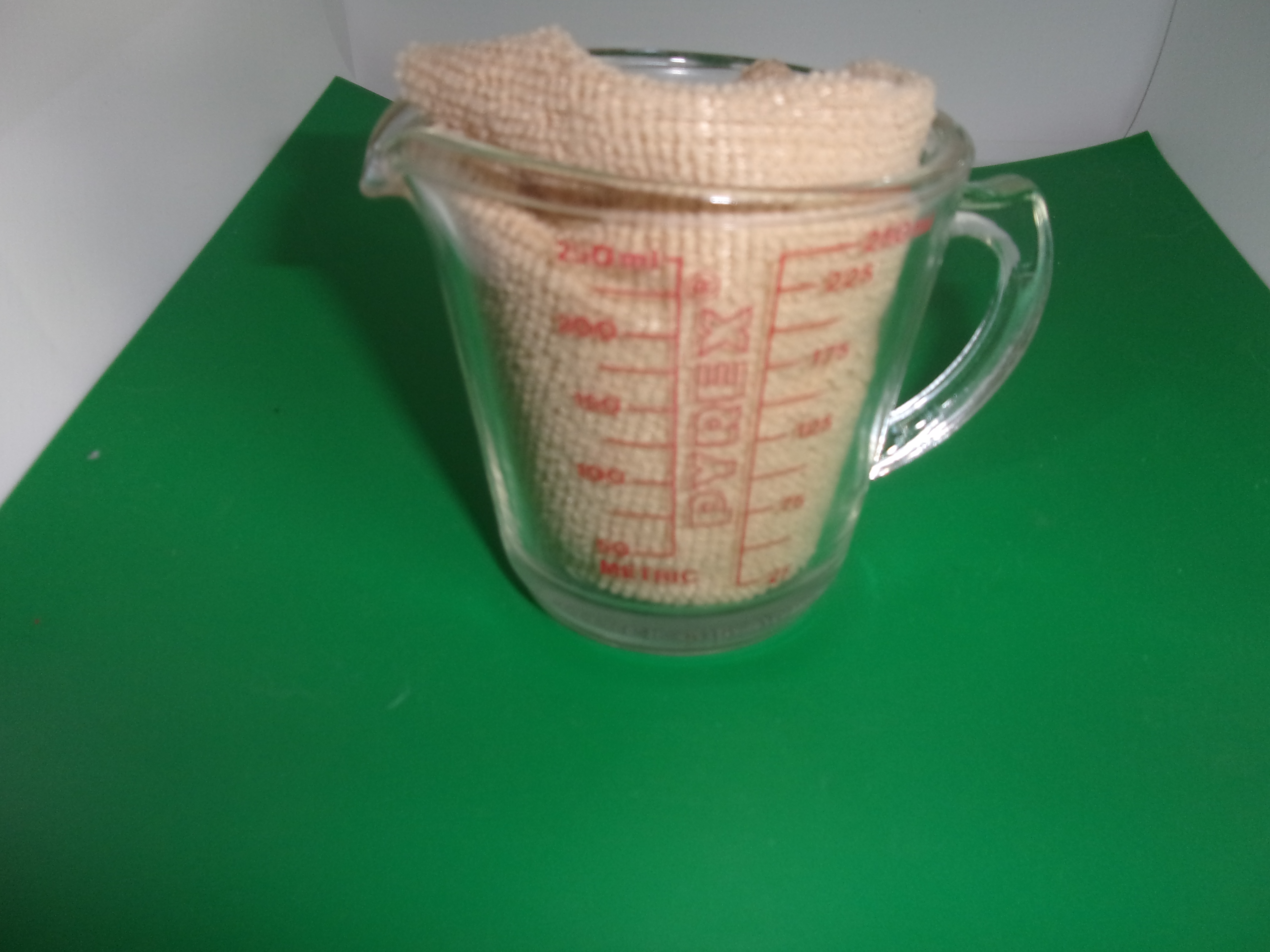 When it comes to the 2 Cup or 1 pint jugs they are much the same as thier smaller relations.

PICTURE 8:This is a type 516 referance H-6. It has the PYREX name down the front filled in and non-metrix measures on both sides with "Not for Lab or Stovetop use" on the base as well as just the trademark, and USA on the base. 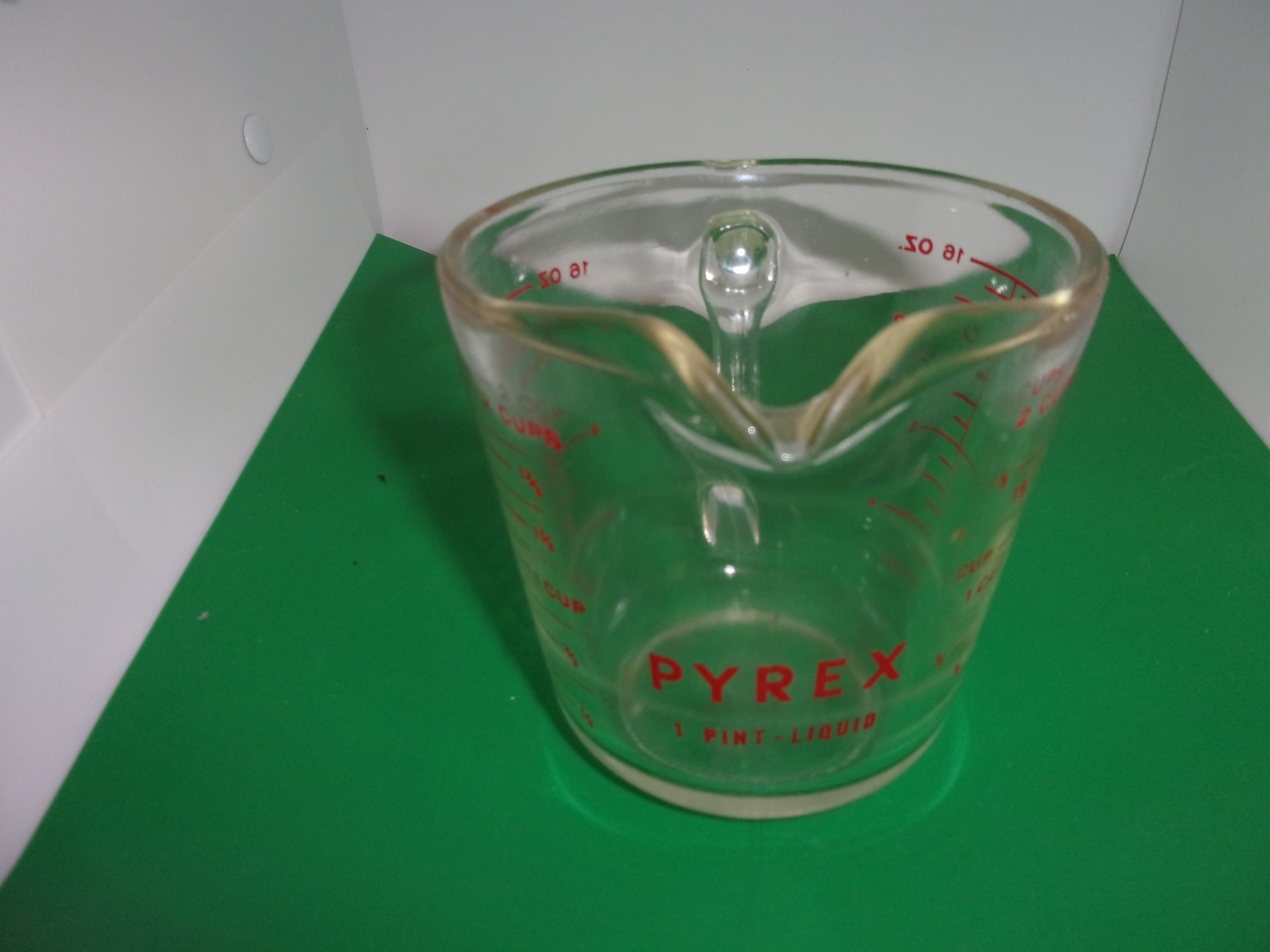 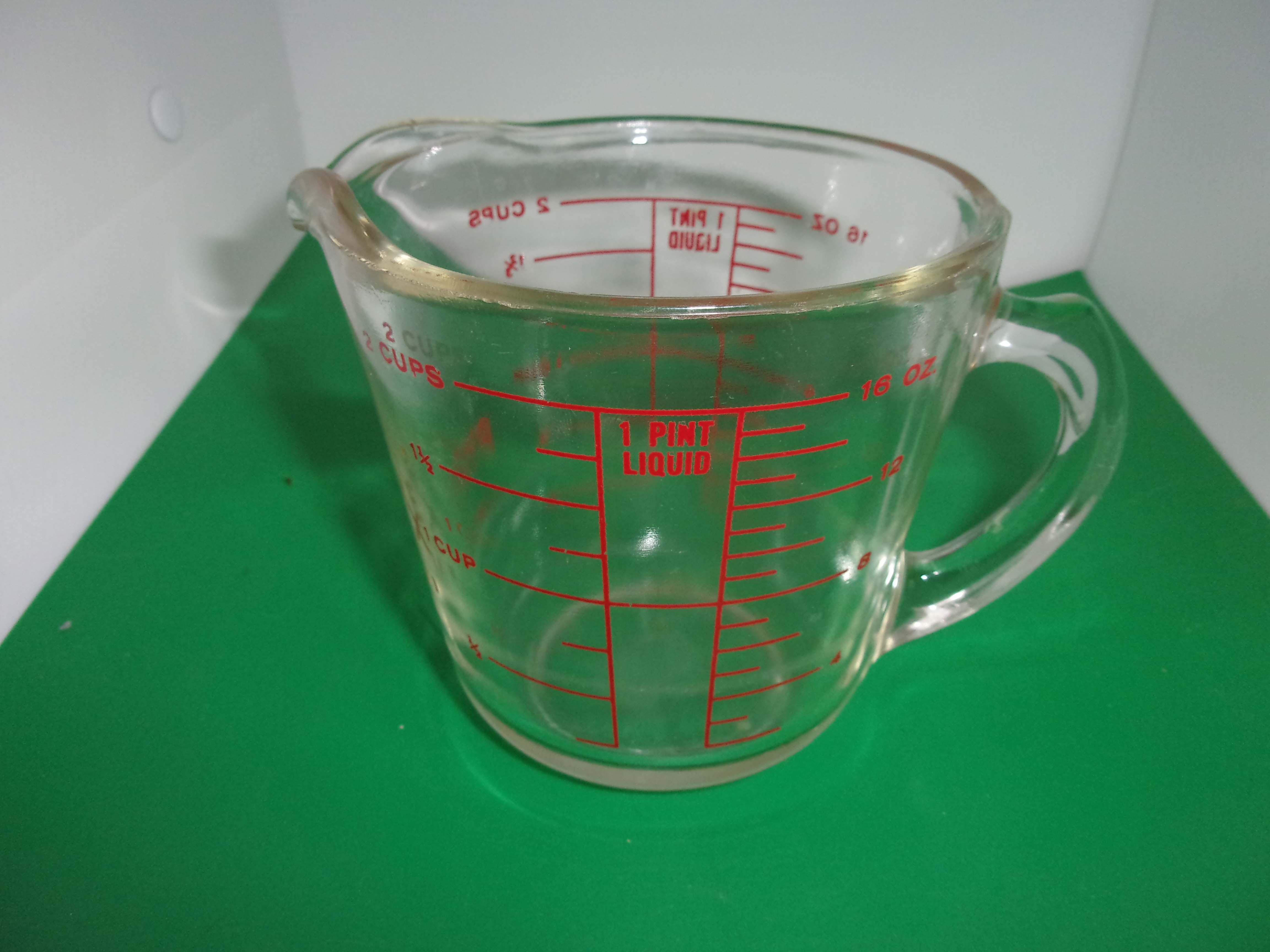 PICTURE 9: This is an J-24 which would tend to point out an early model, with the glass thickness very akin to the 1940's cups. It does though have both Metric and non-metric measurements on the side with the word PYREX in open font. 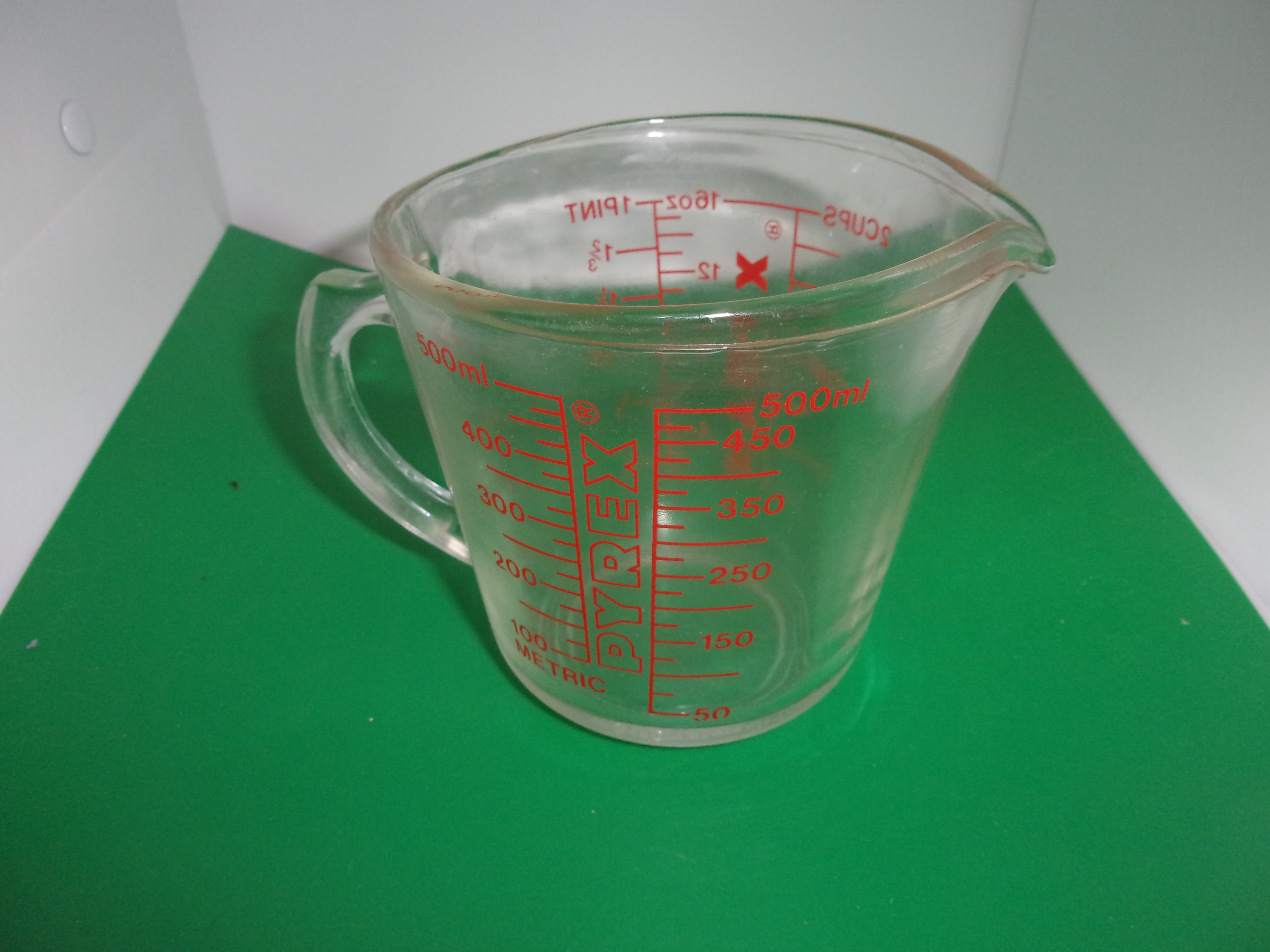 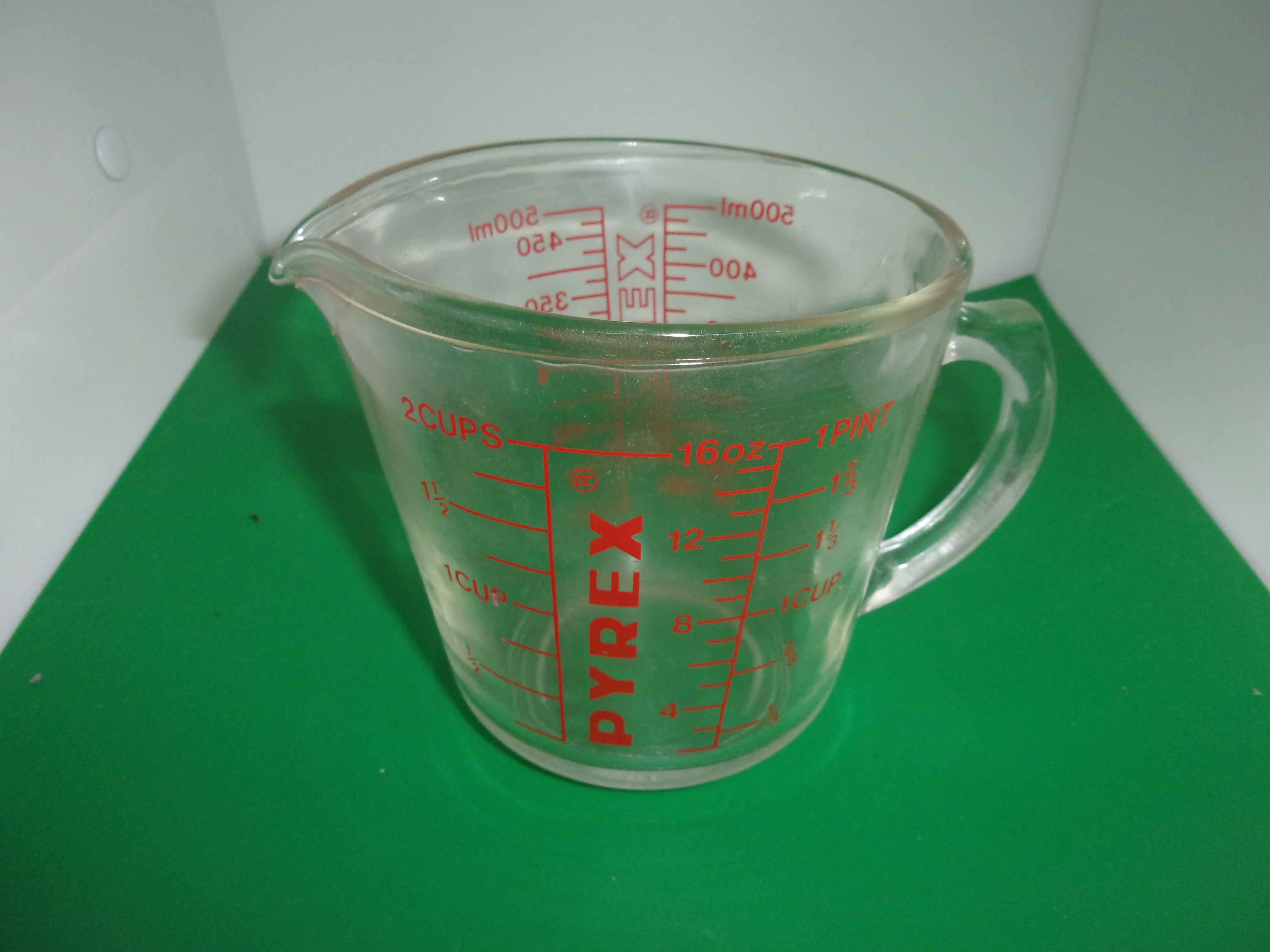 PICTURE 10: This is an J-26 which would tend to make it older than picture 9. It does though have both Metric and non-metric measurements on the side with the word PYREX in filled font on the right for non-metric, and open font on the left for metric. 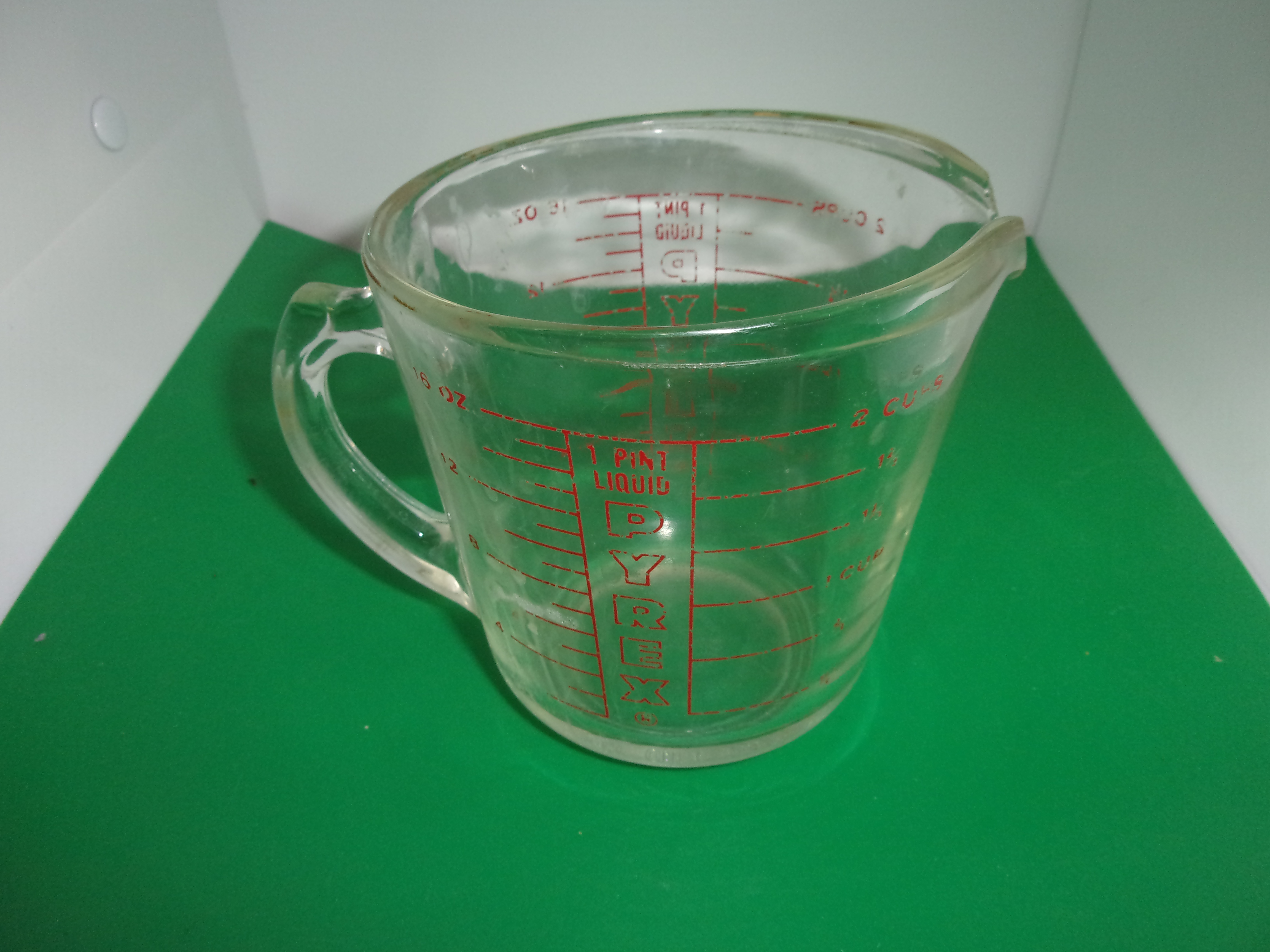 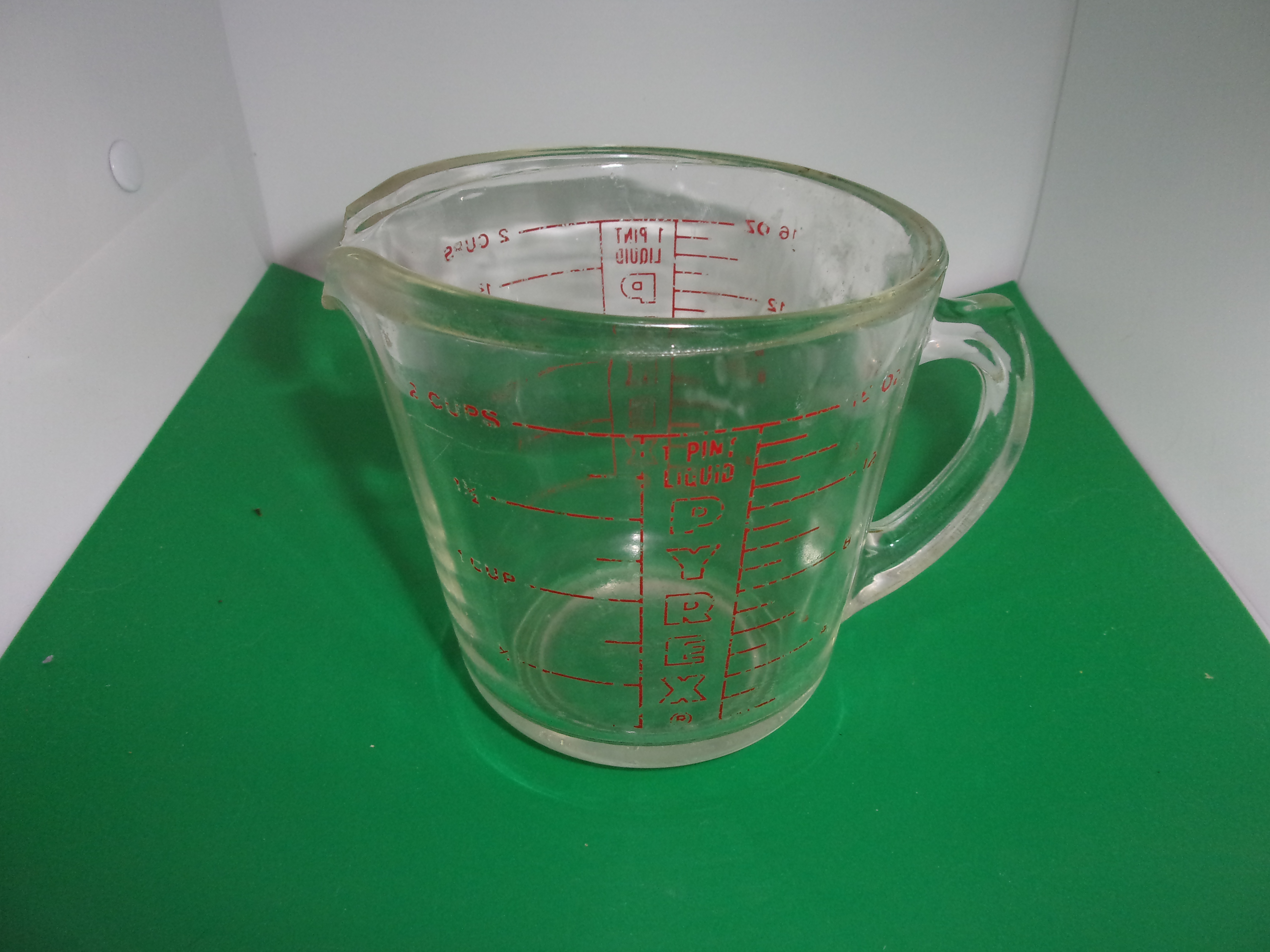 PICTURE 11: This is an F-30 it is more like we see today with both Metric and non-metric measurements on the side in open font. 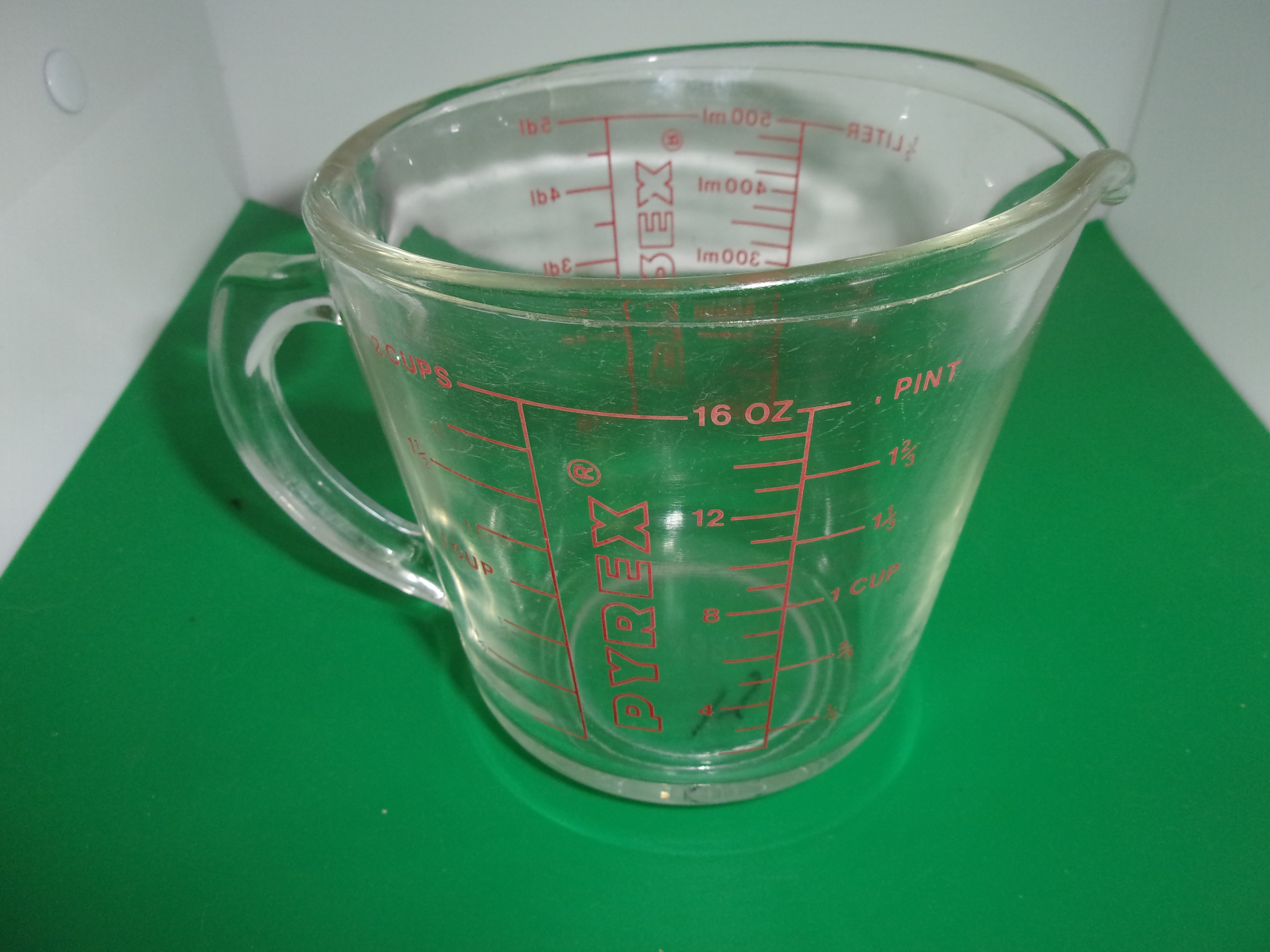 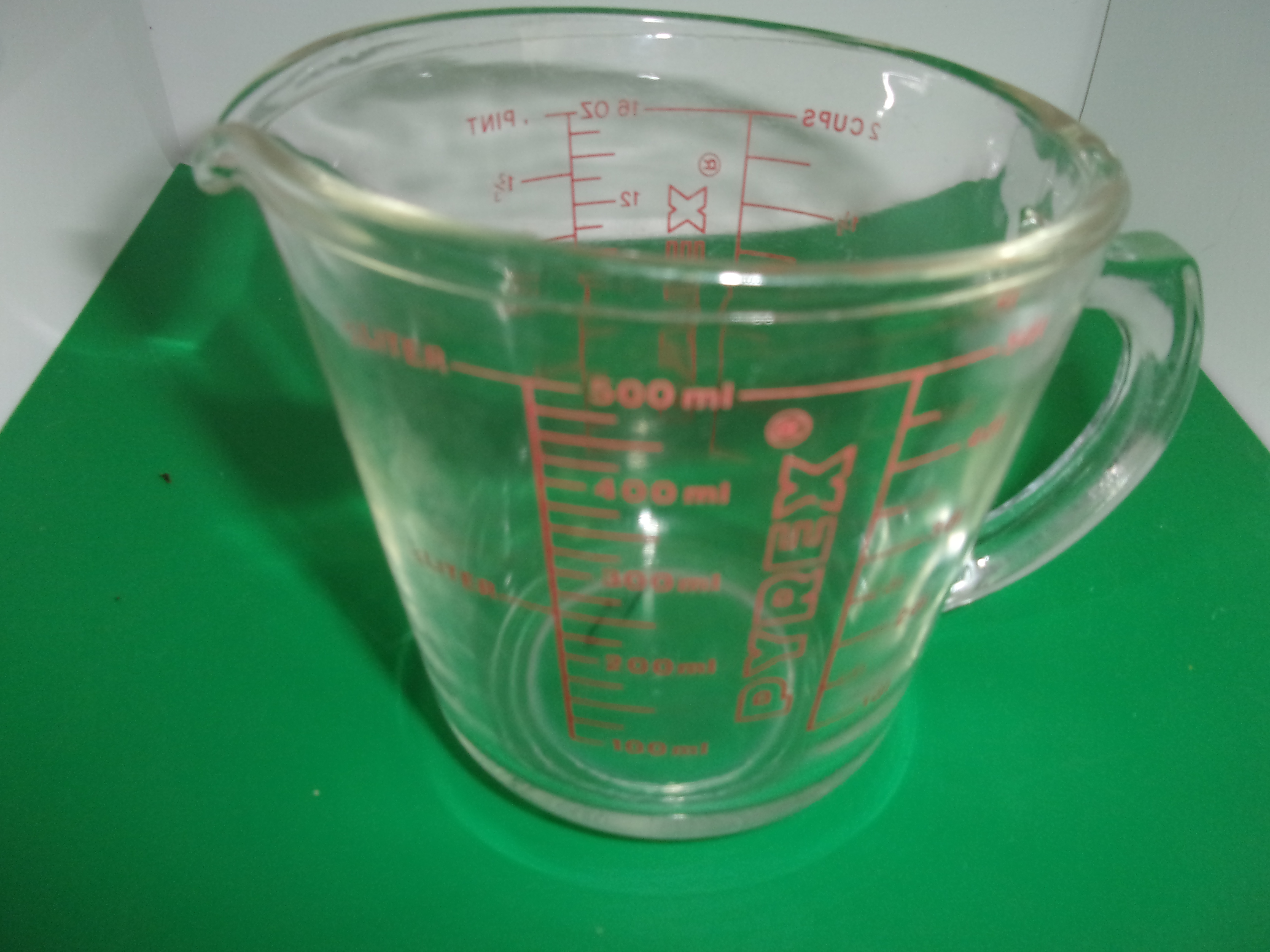